Brunch is by far my favourite meal; it’s better than breakfast because it feels so leisurely, but you get to have all the breakfast-type foods you can think of. For me, brunch must always include coffee and eggs; the rest can vary (if you want to hand me a glass of fizz, and add some cake afterwards, please; go right ahead). So, when I received a message inviting me to try the new breakfast (but, totally brunch-worthy) menus at Boston Tea Party, I thought; praise be (because I’ve been rewatching The Handmaid’s Tale). Then, when I learned that there’d be five of my favourite bloggers there too, I got my red cloak and white bonnet ready. I was ready for caffeine, eggs, and catching up, without anyone judging me for photographing my food, because we would all be doing the same thing. So, I went along to the BTP in Edgbaston on a miserable Saturday afternoon, to cheer-up my weekend with some of my favourite people and, food. 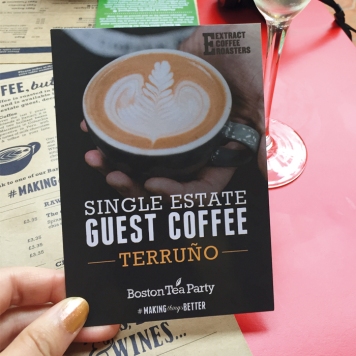 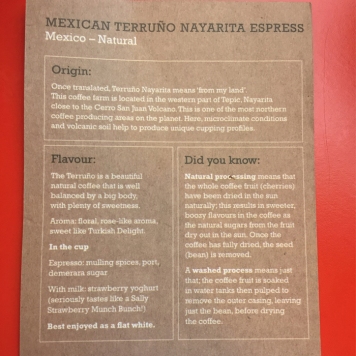 Lets start with the coffee, because I’d always always always order that first; I’ve had many a BTP latte, but never really given much thought to the coffee they use. We were lucky enough to hear about their guest coffee, and learn about the different flavours we would taste, depending on which style of beverage we went for (like if we had it with milk in a flat white form; we would be able to taste strawberry yogurt). A big thank you to Kirsty, who made me think a little more about the aroma and flavour of the coffee; definitely a step up from guzzling it as quickly as possible to fill my veins with caffeine. I’ll be interested to learn more about their guest coffees, and make a point of ordering them in the future. Also, for non-dairy fans/drinkers; BTP does wonders with almond milk in your latte. I wouldn’t worry about the milk separating; mine was smooth, creamy, and I think I described it as a cosy armchair at the time. The coffee equivalent of a power nap; I’ll definitely be ordering again.

Right, lets get on with the food. I’m a creature of habit, so my go-to dish from BTP is usually the Sweetcorn Hash (with halloumi, poached eggs, avocado, tomato salsa, and coriander). I was open to finding something that might tempt me away from this option, but only if it sounded really tempting. Well, as soon as I read Cheddar and Jalapeño Cornbread; I was sold. The Rye Bread Porridge and Avo on Sourdough looked pretty tasty too, but they were no competition for the aforementioned. I’ve included a picture of the menus (both new and existing) for you to get your teeth into… 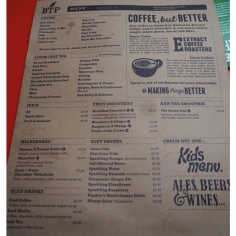 The dish arrived, and I was just as excited as when I’d read the new menu. The egg on top was fried perfectly; those who love to pop a yolk would have been most pleased. I immediately got stuck in (after taking all of the pictures first, obvs). The menu recommended adding chorizo or bacon, but as I don’t eat lil’ (unbearably cute) piggies; I added a side of halloumi, which is where my fork headed first. Warm, crisp halloumi was speared first, followed by a chunk of spicy, comforting cornbread. Next, I used my knife to dollop on a little avocado, followed by a smidge of salsa, then I dunked the lot in the mound of cool yogurt, before directing it all into my mouth. My eyes closed as my mouth did, and I tasted the spicy sweetness of the Tabasco maple syrup first. The cornbread was cake-like and bready, with a grilled flavour over the crispy exterior. The freshness of the avocado and yogurt contrasted perfectly with the sweet and spicy surprises that kept saying hello. The halloumi was an inspired addition (if I do say so myself); it was a salty kick that hung out with everyone else on the plate like a dream.

The little section on the BTP menu, where you can add a variety of extras, should never be overlooked. You can make your brunch perfect for your preferences, and I thoroughly appreciate its presence. I think my usual Sweetcorn Hash has met its match, and I’ll be torn between the two in future. Actually, I’ll just take Marv, get him to order one, I’ll order the other, and then I can eat half of both.

I can’t fault the flavours on the dish; it was just as much of a perk-me-up as the coffee was. The textures all complemented each other, and the portion was more than adequate for brekkie, brunch, or lunch. If I had to criticise anything, it would be the presentation; the yogurt looked like a bit of a haphazard addition/afterthought, and everything else seemed like it had be plated-up in a rush. However, the cafe was extremely busy, and it was in no way awful. It also didn’t affect the taste, which was the main thing. I will definitely be ordering this again. Another thank you must go out to Jack, who told us all about Boston Tea Party, and its different venues; they are all quite different, sympathetic to the buildings they inhabit, and have a character all of their own. He was also a joy when taking our food and drink orders, and kept us hydrated with fresh water at the table. The service has always been very friendly when I’ve visited Edgbaston, Harborne, and the Birmingham branch, which is another reason I love going back.

As we were all groaning with food and coffees; Jack thought he’d further add to our waistlines, and he brought out cake. Like, a little mountain of different cakes. The smallest thing on their was a raspberry rice-crispy cake, and it was delicious, but all I could manage. At that point I was sugared-out. Although, I did return the following day for a takeaway almond latte and a full-sized version of what I’d tried, so it obviously left a lasting impression on me. 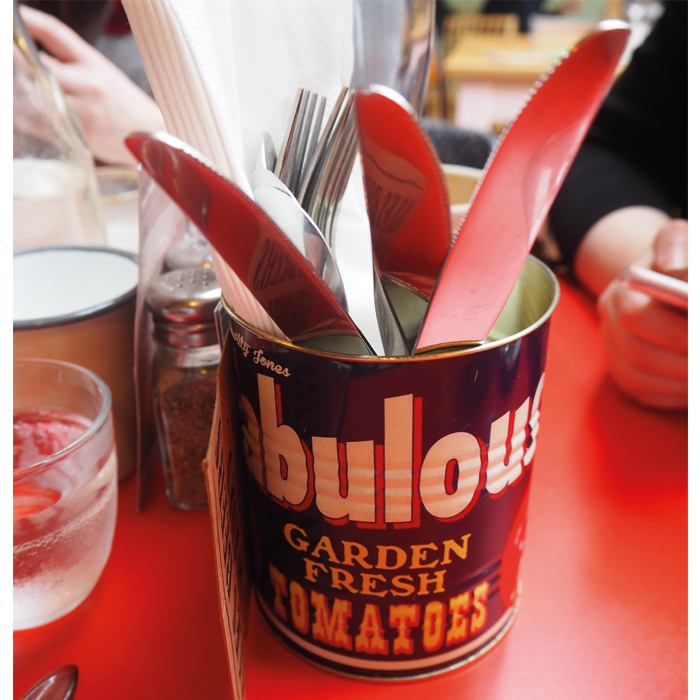 Great coffee, impeccable service, cute venue (YOU CAN TAKE YOUR DOG IN; hey Cosy!), delicious food, and a super chilled atmosphere. A Saturday well spent. I must also thank the company around the table, Vicky, Laura, Chloe, George, and Emma; you all made brunch even better.

I was invited by Laura, from Bite Your Brum to try the coffee and food available at BTP; everything was complimentary. All words, opinions, and pictures are my own (a complimentary meal doesn’t affect my ability to write honest content. Shock, horror). I also went back for more the next day…

One thought on “Chillin’ Out, Maxin’, Relaxin’ All Cool, Eatin’ Some Cornbread, at Boston Tea Party Edgbaston (When a couple of guys…)” 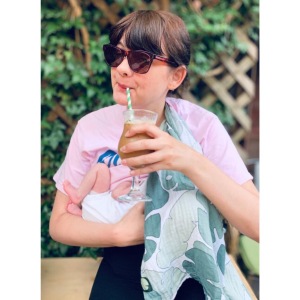