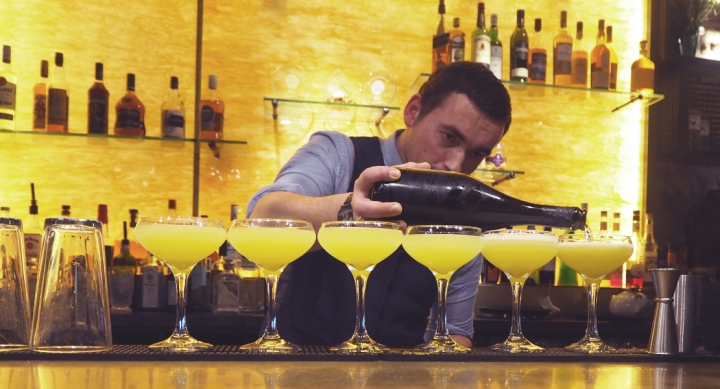 Having eaten at Sabai Sabai in Harborne several times; I was excited to hear that one would be opening up much nearer to where I live, because it’s often been my go-to for Thai cuisine in Brum. Therefore, I was even more excited to hear that I had been invited to try some of the veggie and vegan delights from the menu at the new venue on Waterloo Street in the city centre. I skipped in saying Sabaiiii Sabaiiii in a terrible Cilla voice and annoyed several of my beautiful fellow bloggers (sorry guys). I’d say the interior is grown-up, and, at the risk of sounding like a nan, the word swish comes to mind. I felt a little under-dressed in my jeans and yellow jumper, and think I’ll make a little more effort next time I visit. This is a restaurant perfect for date nights, shopping lunches, after-work dinners, and occasions where you’re really feeling your lip colour that day. You’d start a sentence with “I know a really nice Thai restaurant” when describing it, or suggesting dinner options. Does that make sense?

Anywho, we gathered at the backlit bar (not unheard of behaviour for food bloggers), and got to sample a refreshing and punchy Bangkok Fizz cocktail; a vodka-based drink to wake up your palette, and prepare you for the food ahead. The bar is a plentiful place and will have something for everyone’s beverage preferences and needs. The cocktail menu has all the Thai influence you could want, with an array of twists to your usual treats. The bar staff are friendly, and will help to quench your thirst with a surprise, or something more specific; depending on your mood. There is seating and a table in the cosy bar area; making it the perfect place to settle-in, before heading over to your table, like we did.

It all started with some crunchy crackers and a sweet chilli dip; I was facing my fellow (temporarily) veggie diner Vicky, and I was feeling happily-tucked into a soft booth seat. Carby things with dips and lovely company are a perfect combination, so my evening was going well. Obviously, I can’t tell you about the meat platters that were being shared among the rest of the table, but there were lots of “mmmms” and the odd groan of delight. Vicky and I were given some sweetcorn cakes and spring rolls, which were texturally very nice. However, the flavours were similar, and we definitely weren’t getting the wow factor that some of the meat eaters were experiencing. A tasty and pleasant way to start, but without any flavour fireworks. I did scoff the lot though, so it definitely had some appeal for my appetite.

I wasn’t worried about what we’d be eating next, but if I had been; I needn’t have. We were presented with a selection of veggie dishes, and there was more than enough to make my jeans uncomfortably tight. I’ll start with my favourite of the bunch; the yellow curry, aka the Geng Ka Ree. Packed full of sizeable pieces of veg, including carrots, peppers, potato, and baby corn; the curry had heat and depth, and was the sort of dish you’d happily eat with a spoon from a bowl on its own. Pure Thai comfort food; the vegan yellow curry filled me up nicely, especially when I accompanied it with the garlic rice. For all you type 1s; I did three sets of insulin that night, to stagger the large quantity I needed, as I knew the rice could cause problems later on with a blood sugar spike. However, you could totally order the curry alone, sans rice, as there were already potatoes in it and it wasn’t too spicy at all.

Next on the nice list, and one which I think everyone at the meal would agree was a surprise hit, was the garlic tenderstem broccoli. Cooked to crunchy perfection and hugged in a light, but flavourful, oil; I’d have happily eaten several plates of the stuff. I can honestly say that I’m rarely this enthusiastic about broccoli of any kind, and it’s not something I’d have ordered having not tried it, so I’m super happy that I did.

We were also served a tasty Pad Thai with tofu; the rice noodles were light and the stir fried veg had all the crunch you’d want in this popular favourite. The only thing I’d change would be the peanuts and chilli flakes being served at the side of the plate, in small heaps. It’s just a personal preference, but I’d rather them have been mixed in with the noodles and vegetables when served. However, I’m sure there are plenty of people who will enjoy sprinkling their ideal amount on top of the dish, and it certainly didn’t ruin anything. There was also a spicy, sweet, fresh, and crunchy Papaya Salad presented. As someone who normally skips past the salad section on a menu (unless I’m specifically out for salad), I didn’t really give it much thought. However, I’m so glad I got to try it; it was so flavourful, and something that contrasted with the curry and noodles perfectly. If you’re out in a group; I’d definitely order one for the table, and I won’t be so dismissive of the salad options in future, especially not in Sabai Sabai.

We ended the meal with an Espresso Martini; I’ve been enjoying these recently, so have a fair few to compare this one to, and I can confirm it was very good. It wasn’t sickly at all, which has been the case for a few others I’ve drank around Brum, and if you do favour them; I’d thoroughly recommend having one in Sabai Sabai.

I should also mention that there was a lot of knowledge surrounding the drinks, and the wines served on the night, which accompanied our food. I am not a big wine drinker, so, if you’re looking for in-depth descriptions; you are reading the wrong blog. I did have a Pinot Noir which I enjoyed, then a fresh white wine was served, which was also very nice (see; Jilly Golden I am not, sorry). I thought I’d mention it because there are obviously a lot of vino fans out there, and from what I can tell; Sabai Sabai has a great selection, and can advise you on what to pair with your food. And, advice is nice right? Advice is sharing, and sharing is caring etc…

I had a great evening and left full of delicious Thai food, having tried things I’d never normally order, but will do in the future; a success! I’m writing this on a Friday night, having just pulled two minestrone soups out of the freezer, and it’s making me really sad. I’d love a Sabai Sabai yellow curry right now, but I’m already in my PJs.

Peace, love, and a thorough understanding and appreciation for various wine, Fay x

I was invited by Delicious PR (thank you) to try the food in Sabai Sabai, and everything I consumed was complimentary. I would hope by now you know that all opinions, feelings, and thoughts on the food are my own.