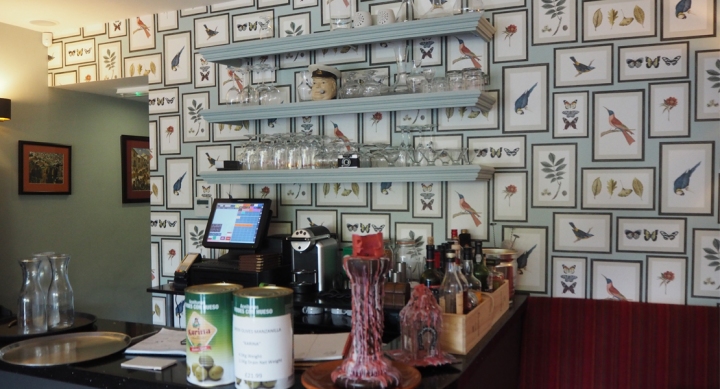 Snuggled into a little row of shops in Edgbaston, opposite the White Swan Pub, sits Don Diego; a restaurant run by two brothers, serving up fresh homestyle food full of Mediterranean flavour. I visited on a Saturday night with my husband Marv; we were lucky enough to share a table and have a double date with fellow blogger Emma and her lovely other half, Richard. Service was lovely from the get-go. One brother is in the kitchen doing all the cooking, and the other is front of house; ensuring that everyone has a drink and are enjoying their food.

I loved the booth-style seating, and the wallpaper was awesome (even though our double date was going great; it would be a great distraction if yours wasn’t); it felt cosy and relaxed, and we were all excited to try what was on the menu.

For my starter i went with the fish cakes. I’m always a little worried when it comes to fish cakes, because if they’re massive and 90% potato; that’s a lot of carbs to contend with, and insulin to inject, on my first course. I needn’t have worried; they were deliciously crispy balls made up of mainly fish, and they were lovely. Three arrived on my plate (kinda reminded me of a smily face, and I loved it), with some aioli (left eye) and salsa verde (right eye) to dip. They were perfectly seasoned and had a sprinkling of paprika, which gave them a Spanish warmth and gave me holiday feels. Three was a perfect number for a starter, and I’d order these again.

Next up I chose the swordfish. I love swordfish, and often have when I’m abroad; so I was expecting great things, and for it to fill me up. I was so happy when the plate was placed in front of me. What a hunk of fish, and the fresh griddled aroma filled me with joy. The simplicity and rustic-style really complement Don Diego’s ingredients; it’s all about being able to scoff everything that’s on the plate, and I certainly did. There’s no bells and whistles here; it’s a small menu, cooked by a skilled chef who loves his dishes, and I was super impressed.

I squeezed some of the lemon over the top of my fish, added some of the chips and veg that we ordered to accompany the mains, and got stuck in. The fresh salsa verde went with all the ingredients, and again, the seasoning was just right; it felt like everything that should be on the plate, was on the plate. The fish was firm and melted in my mouth, and with the zesty lemon and fresh salsa; i was gone pretty quickly. i loved it. 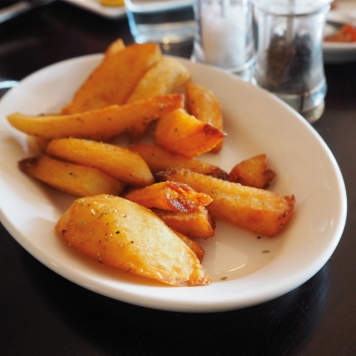 Next up, it was dessert time. I didn’t feel like I had much room left, but somehow, my heroicness kicked in, and like the food blogging trooper I am; I managed to pick something from the menu (you’re welcome). I went with the mousse of crema catalana with ginger compote, because you know, thought I’d keep it light (lolz). The flavour was so good, but sadly the texture was more soupy than moussey (so not a word). It was a hot ay in Brum, and the kitchen was even hotter (we got to go and have a look), so I think it just didn’t have time to set, after being made freshly that day. it was a shame, but it didn’t ruin the overall meal, as I said; the flavours were all there, and I finished it all, which speaks volumes.

I also tried some of Marv’s cod loin (not a euphemism), because we’re married and he knows I have to try everything he eats. The fish was again cooked to perfection; super soft and it flaked with ease. It came with an Andalusian tomato sauce, which I thought was lovely because it didn’t over power the cod. However, Marv said he’d have liked more punch regarding spice, but he’s a chilli addict. I also got to nibble some of Emma’s griddled octopus leg, which was so good. I kind of wished I’d have picked that after I tried it. It will be what I have when I return; crispy on the outside with a firm middle. And again, the warm paprika was just enough and let the other flavour shine through.

This is by no means the cheapest date night you’ll ever have, but I feel that the food and service are more than worth it. It’s a hidden, independent gem, and it’s worth taking some great company and enjoying what’s on the menu.

Pssst…I also filmed some of our time there, and our trip into the kitchen, in one of my vlogs…

*I was invited by East Village PR to try the food at Don Diego, and it was all complimentary. Words, images, tastebuds; all my own x

One thought on “A Dreamy Date Night In Don Diego”